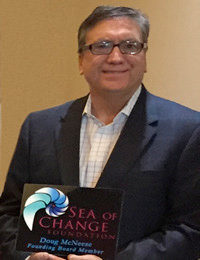 Doug McNeese has been involved in the diving industry since the age of 10 when his family opened up their first dive store ‘The Dive Shop, Inc’. Through high school and college, Doug worked his way to become the top sales person and earned his Open Water Instructor rating in 1974. In 1982 he purchased ‘The Dive Shop’ from his father and began the expansion of the company and his training, which now has four locations in the Southeast United States, all with indoor pools.

Doug has two passions – retail and training. His second passion led him to purchased NASDS and in late 1998, after a call from an industry veteran, Bob Clark, with Scuba Schools International (SSI) and merged with SSI. In 2008, Doug McNeese and Robert Stoss purchased SSI. In 2014, SSI was sold to the Head Corporation to continue the quest of strengthening the growth of training and to help retailers succeed.

Responsible for sales, including training and marketing, Doug is still the President of SSI USA and will continue to be a driving force to promote SSI worldwide and strengthen its growth through retailers and manufacturers. Doug strongly believes that the “doorway to diving” is the retailer. His passion is to go beyond what has been done, bring more people into the sport and to make scuba diving a lifetime sport.

The Sea of Change Lifetime Explorer Award honors individuals for a lifetime of excellence in environmental awareness and exploration.

By Megan Hoover, Sea of Change Foundation Intern Samantha Whitcraft, Sea of Change Foundation, Executive Director             It’s that time of year again when Shark Week commercials promoting documentaries and shows on Discovery Channel and National Geographic begin. This year is the 34th anniversary of Shark Week, and both Discovery Channel and National Geographic have […]

The Sea of Change Foundation funds conservation and research initiatives that directly impact the natural world we all love to enjoy and explore. Our mission is to create positive change.